Here, we consider a census-based methodology presented in Bills (1989) and Bills, Chávez, and Hudson (1995) to assess rates of Spanish language maintenance in metropolitan statistical areas (MSAs) in the US, as well as some geographic and demographic factors that may influence such rates. Ultimately, the goal is to provide a simple characterization of MSAs where Hispanics are more likely to be speaking Spanish.

First, we take a look at Spanish language maintenance in New Mexico in comparison to some other MSAs rich in Hispanic heritage. Then we explore some macro-level relationships between language maintenance rates, geography, and a set of population-based metrics for all MSAs in the US.

Language data for the Hispanic population live in census table B16006, which provides summary counts of speakers by language spoken at home and level of English proficiency for the population over 5.

To investigate variables comprising a particular census table, we can use the load_variables function from the tidycensus package.

The table below summarizes the variables included in census table B16006. A third column, speakerType, is added, which reflects a re-categorization of census variables per our purposes here.

Based on these distributions, we follow Bills (1989) in approximating the language maintenance rate for a given community as the sum of rates of monolingual Spanish speakers and bilingual speakers.

In addition to maintenance rates, we characterize each community/geography in terms of its overall population and its Hispanic population density, ie, the percentage of a community that identifies as Hispanic. This very simple demographic profile can be derived from variables included in census tables B01001I and B01001.

To gather these two sets of data for the most recent 5-year ACS estimates (2011-15), we use the the tidycensus package. Our query is comprised of seven variables from three tables:

Relevant geographies include all metropolitan statistical areas (MSAs), all US States, and the US.

We then apply the tidycensus::get_acs function across each geography to obtain our data set.

New Mexico & the US

So, we first take a comparative look at rates of Spanish language maintenance in New Mexico and some other MSAs rich in Hispanic heritage. Geographies in this subset, then, include the US, the state of New Mexico, all MSAs in New Mexico, and ten additional MSAs from around the country.

Columns can be sorted by clicking on the column name.

As can be noted, there is a considerable amount of variation in the distribution of speaker-types across geographies. A less interactive, but more comprehensive display of this variation is presented in the figure below. The plot is sorted by rates of language maintenance (ie, SpanMono + BiLing). The percentage of Hispanics that are monolingual English speakers is transformed to a negative value to hack together a likert-like plot in a simple fashion. 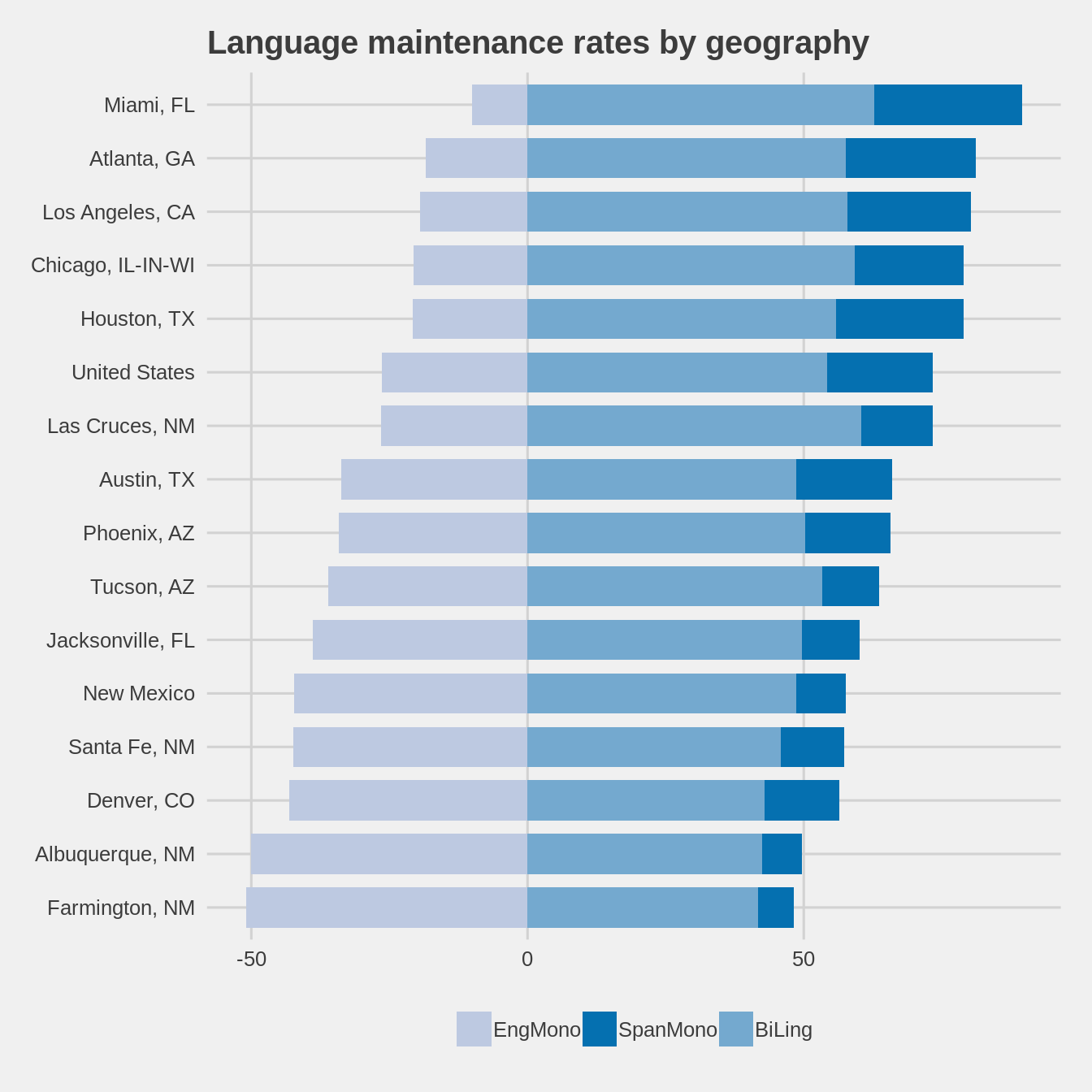 So, some quick observations from the table and figure.

Next, we consider variation in maintenance rates as a function of geographic location, Hispanic poulation density, and overall poulation for all MSAs in the (continental) US.

MSAs are geographical areas (comprised of counties) that often span multiple states. As polygons, they do not make for fantastic maps as they do not provide coverage of the entire US. A visually cleaner approach is to represent each MSA as a single point (or centroid) instead. This additionaly allows us to add some regional geographic data (eg, US divisions) to our demographic-linguistic profile of each MSA via a spatial join.

Using the tigris package, we import a US Divisions polygon as an sf spatial object:

Next, we import a MSA polygon, get the centroids of each polygon, and spatially join the US division polygon to the centroids. All of this can be accomplished in the following pipe with the help of the sf package.

The result is a sf point geometry that includes MSA centroids (as lat/lon points) and the US division each MSA falls within.

Limit analysis to MSAs in the continental US, and then join our new MSA-division point geometry:

Hover over the legend to see how quantiles translate to underlying rates of Spanish language maintenance.


The map illustrates higher rates of Spanish language maintenance in coastal and border states. Per our previous observation, MSAs in the Southwest (with a few exceptions) are largely in the red (ie, below-median) when it comes to maintenance rates.

In the scatter plots below, both independent variables have been log-transformed to smooth out their distributions some. To get a better sense of geographical variation, MSA names are included in plots; colors reflect US division. Note that not all data points are included in the plots to avoid overlap and aid in readability. 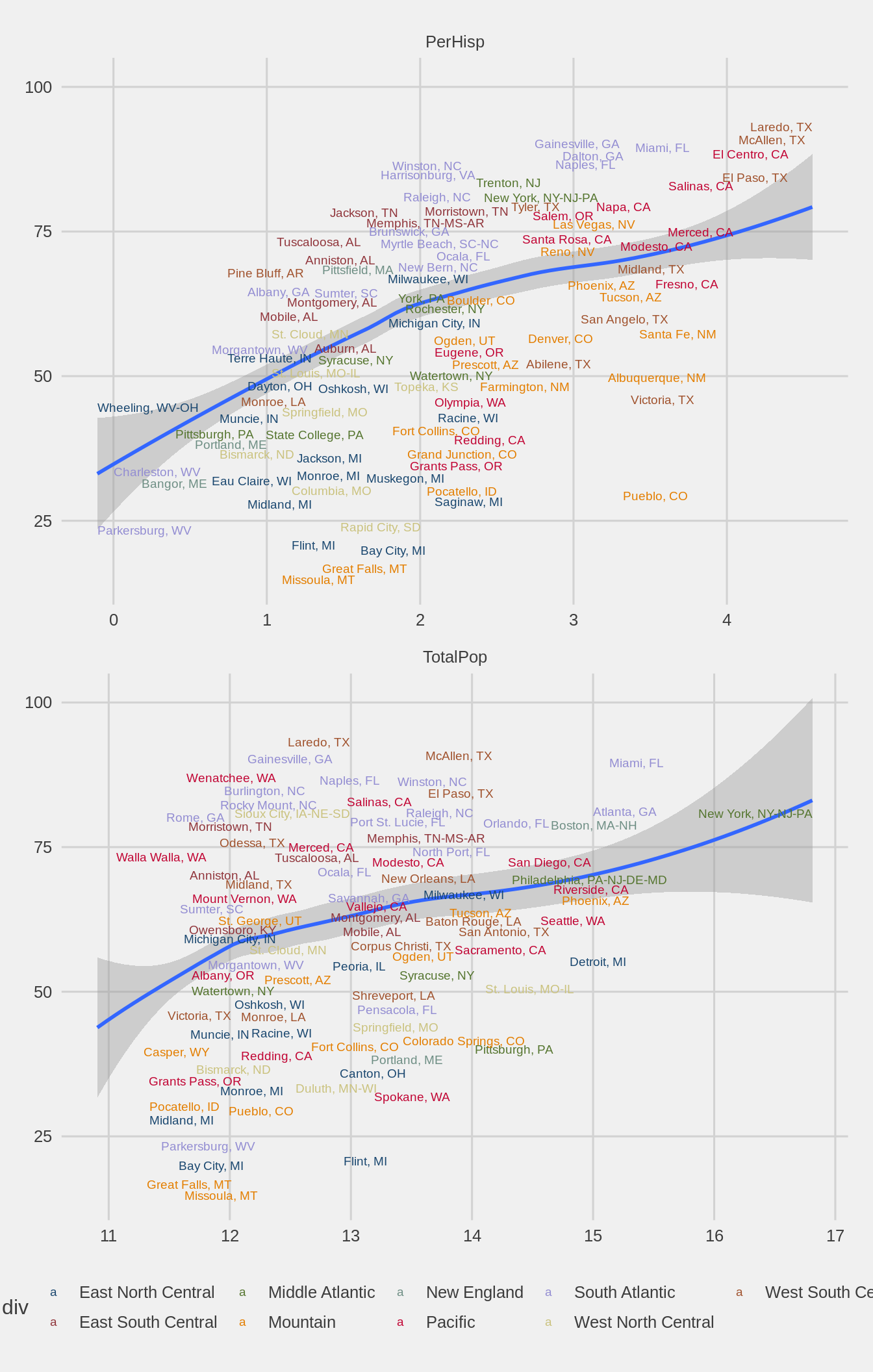 So, results of the model suggest that rates of Spanish language maintenance are higher in:

Additionally, results suggest that Hispanics are less likely to speak Spanish in MSAs located in the Mountain division.

In terms of accounting for the independent effects of the two population-based metrics, on one hand, densely Hispanic MSAs imply a more pervasive Hispanic culture; on the other hand, highly populated MSAs imply an overall culture of diversity. In theory, each account provides a distinct “mechanism” for continued language use.

Higher rates of Spanish language maintenance in the South likely reflect more recent immigration patterns. In contrast, lower rates in the Mountain division (including the Southwest) could reflect a combination of higher levels of acculturation among these Hispanic populations and lower immigration rates (as suggested in Bills 1989).

So, a quick and very much exploratory investigation into Spanish language maintenance in the US, using census data as an imperfect proxy. Grains of salt abound for sure. Factors influencing whether or not speakers continue to use a minority language are many and complex, and are only superficially addressed here.

Many of these patterns (at least in the Southwest) have been observed previously; the goal of this post was simply to demonstrate an innovative methodology based in previous research using a reproducible example.

Bills, Garland D, Eduardo Hernández Chávez, and Alan Hudson. 1995. “The Geography of Language Shift: Distance from the Mexican Border and Spanish Language Claiming in the Southwestern Us.” International Journal of the Sociology of Language 114 (1). De Gruyter: 9–28.