In this post, we introduce a new R data package, nmlegisdatr, that makes available roll call data for New Mexico’s 53rd (2017-18) State Legislature (NMSL53). While these data are publicly available via nmlegis.gov, they are wrapped up in thousands of PDFs and, hence, largely inaccessible.

I have scraped roll calls and legislation details from these PDFs, and tidied things up some as a collection of data frames1; a full code-through of how the package was built is available here. The package can be downloaded here.

In this post, then, we demonstrate the contents/structure of the package, as well as its utility as an analytical tool. Ultimately, the goal is to make voting histories available (in an actionable format) for interested folks in New Mexico, as general elections for all 70 House seats are in November. This is the first in a series of posts investigating NMSL53.

The table below details the different data frames included in the nmlegisdatr package. Column names are consistent across tables, facilitating easy joining. We will demonstrate their specific contents as we go.

We first consider some high level characteristics of NMSL53. Based on the nml_legislators data frame included in nmlegisdatr, the table below summarizes chamber composition by political affiliation. As can be noted, a slight majority in the House for Democrats, and a more sizable one in the Senate. So, unified party control in New Mexico’s legislative branch. (See postscript for a code-through of visualizing congressional compositions.)

A sample of the nml_rollcall_results table is presented below. As can be noted, the table breaks down each vote by party affiliation. It also summarizes how each party voted in the aggregate. Examples below are for House votes only.

Based on this table, we can get a sense of the degree of bi-partisanship in both houses. Here, we classify each roll call as one of the following:

The table below summarizes these distributions. Both chambers, then, vote largely in full consensus. I am not sure if this is typical of state legislatures, or if this is good or bad. That said, quite a bit of legislation is largely symbolic, eg. memorials, for which there is little contention.

Next, we consider some details about the aggregate voting records of lawmakers in NMSL53. The nm_legislator_descs table summarizes the total votes cast, party loyalty, and attendance rates for each lawmaker. A portion of the table is presented below.

The plot below summarizes attendance rate distributions by political affiliation for each house. While attendance rates are generally quite high, Democratic lawmakers are less likely to miss roll calls than their Republican counterparts. 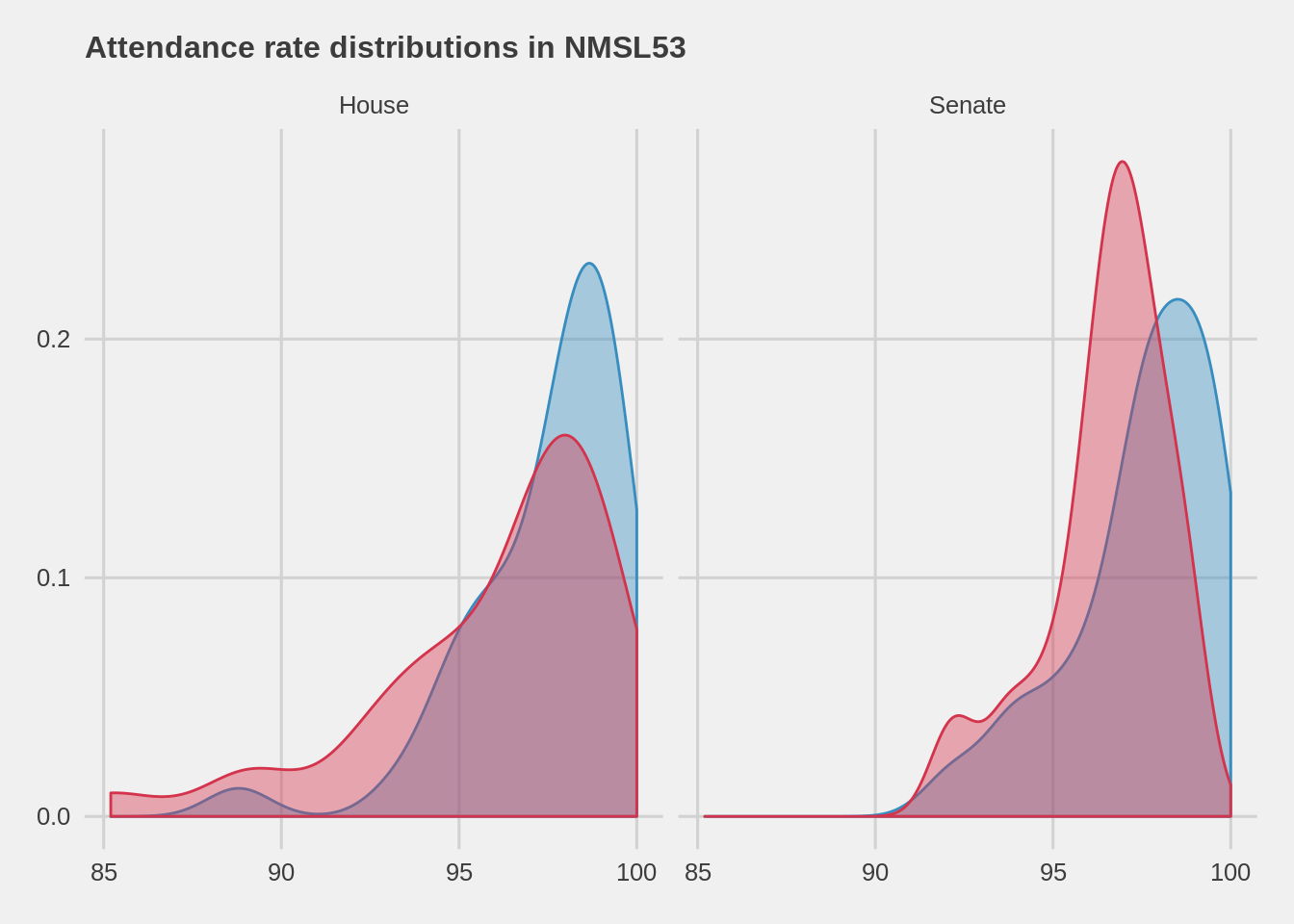 The plot below summarizes party loyalty rate distributions by political affiliation for each house. Again, party loyalty rates are quite high in each party; however, in both the Senate and the House, Republicans are less loyal to party than Democrats.

This discrepancy is clearly a complicated one. Certainly relevant is Democratic majorities (and fairly sizable ones) in both chambers. Also relevant is potential variation of political ideologies among Republicans in a cash-strapped state that has become solidly blue. 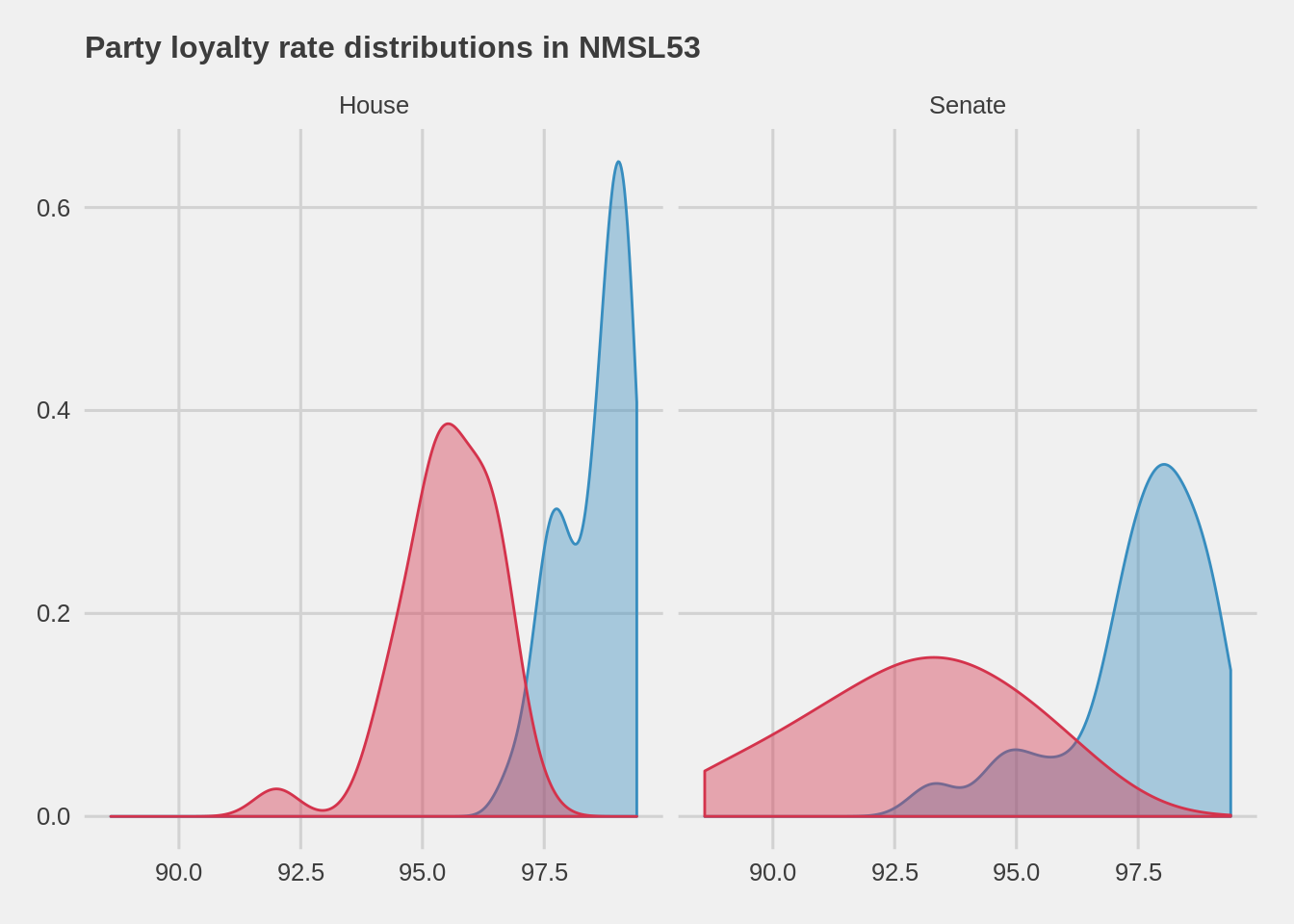 Roll call data underlying these aggregate voting records can be quickly accessed for individual legislators in NMSL53 using the nml_get_legislator function from nmlegisdatr. The function takes two parameters, legislator and chamber, and returns a list of three elements.

Below we access the Voting_Record element of a search for Republican Congressman James Townsend from House District 54. Member_Vote values in all caps indicate votes in which a lawmaker voted against the majority of his/her party.

Next, we take a more detailed perspective on NMSL53, and investigate the results of individual roll calls. For demonstration purposes, we focus on legislation that references either “Health Care” or “Health Coverage” in their descriptions. Bill descriptions and details are available as a data frame in nml_legislation; an example piece of legislation is presented below.

We can search these bill descriptions for reference to “Health Care/ Health Coverage” with a quick/simple call to the gregexpr function — the table below summarizes the results of this search.

Then we summarize roll calls for Health care-related legislation that actually went to vote in the House. The faceted plot below illustrates vote results by party affiliation; we use the nml_fill_vote to color-code votes by party affiliation akin to the color scheme used at VoteView. So, a nice high-level perspective. 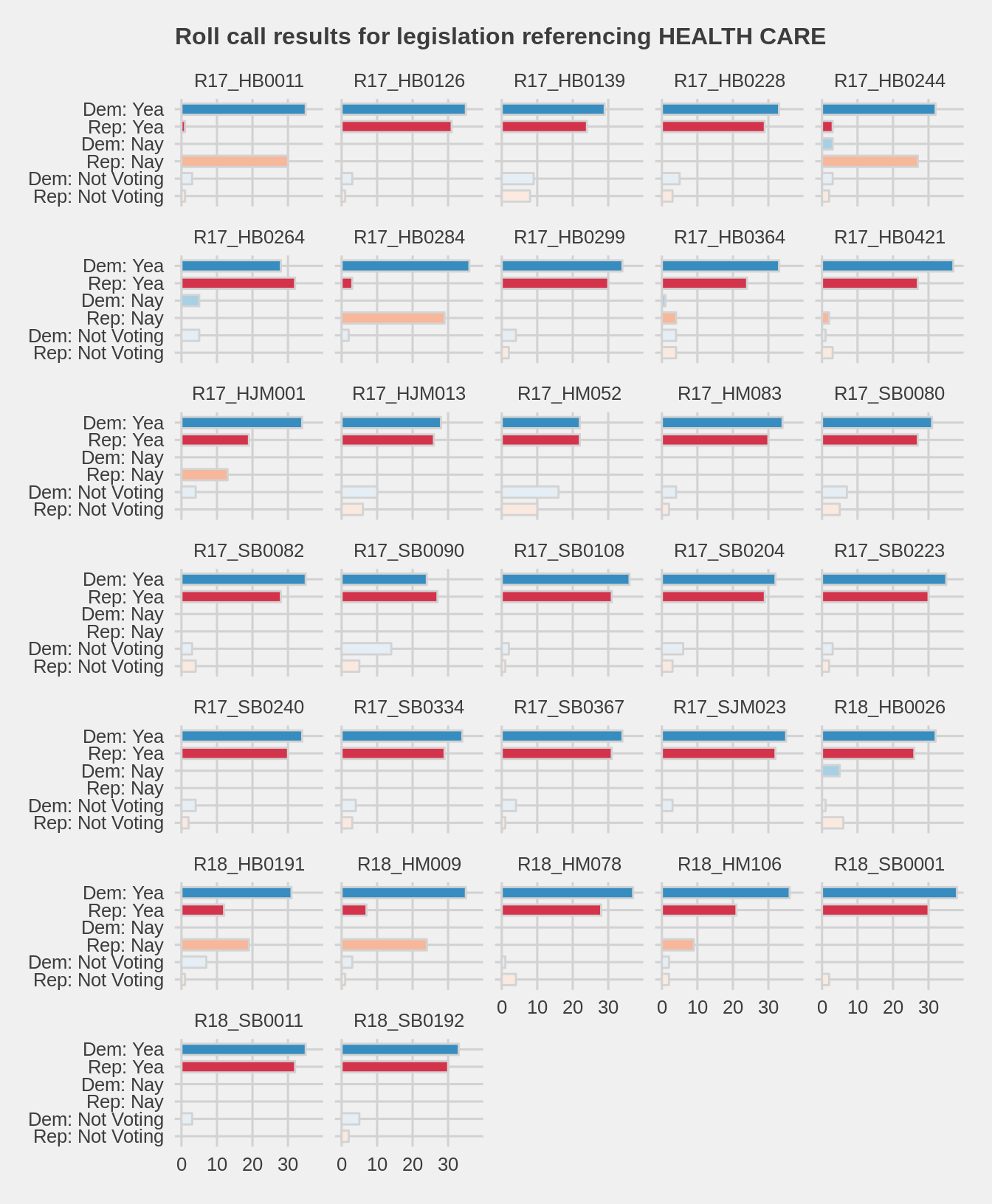 While most roll calls in this subset are lopsided in full consensus (ie, yea’s all-around), there are some examples of party-line votes as well as some in-party divisiveness (mostly among Republican state lawmakers).

The nmlegisdatr package includes a simple roll call search function, nml_get_bill, that allows users to quickly obtain details about a given piece of legislation. The year, session, bill, and chamber parameters can be used to identify legislation. The function more or less just filters the multiple tables included in nmlegisdatr and collates bill details in one place (akin to the nml_get_legislators function presented above).

The Description element provides a brief bill description as detailed below. The prefix “R18” specifies a Regular session vote in 2018. 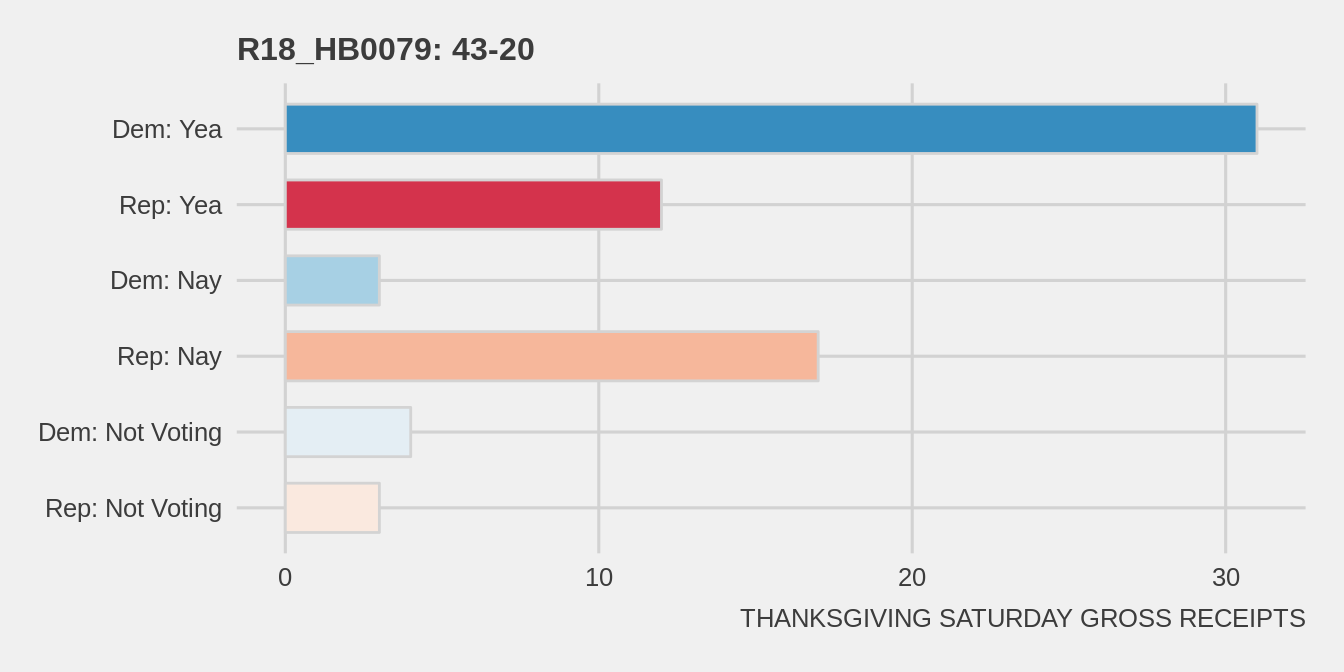 We then map roll call results by legislative district using the leaflet package, again using the nml_fill_vote function to classify votes by party affiliation. Among other things, the map illustrates an aversion to gross receipt tax exemptions among Republicans in southeastern New Mexico.

So, a bit of a walk-about through some roll call data in New Mexico. Hopefully folks in New Mexico will put this package to smarter uses to help inform local politics. General elections for the 54th Legislature in the House of Representatives are in November. Many incumbents (with voting records) are up for re-election. Know how your representative votes.

Here we demonstrate how to create a visual representation of the composition of each house that displays congressional seats color-coded by political affiliation (per, eg, Wikipedia).

To do so, we utilize two functions modified from code made available here. The first function “draws” congressional seats for N legislators and M rows in a half-circle.

The second function assigns each seat to a party affiliation based on the composition of a given congress.

We apply these two functions to the summary composition of each congressional chamber.

Lastly, we plot the results. The nmlegisdatr package includes several different color palettes that can be used within the ggplot framework to add colors to plots based on political affiliation, eg, Republican/red and Democrat/blue. Here, we use the nml_color_party function to color congressional seats. 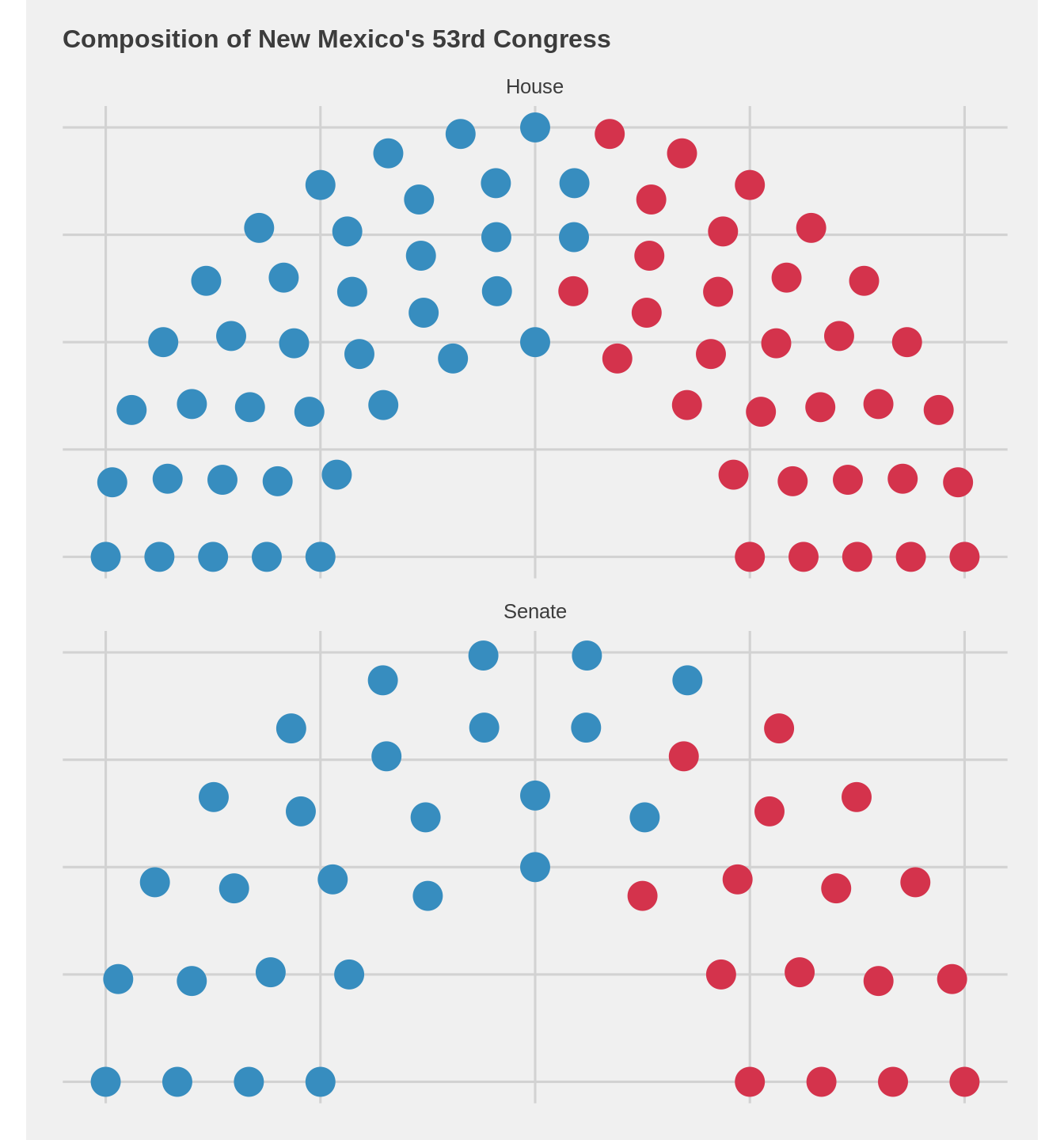