(Also – just an FYI: I have started posting super short snippets of R code on Git Hub, mostly related to things text & politics & both. Meant to be quick & useful.)

The basic model we consider here is ~formalized as follows:

Can we predict how house members vote based solely on the characteristics of their constituents, their party affiliation, and their age/gender/race? Variables comprising these four model components (for district i and the representative of district i) are summarized in the table below. Variables included here mostly align with those presented in McCarty, Poole, and Rosenthal (2016). We will describe the details of variables & sources in the following sections.

The dependent variable in the model is roll call voting behavior, or political ideology. DW-NOMINATE scores from the VoteView project are accessed here via the Rvoteview package. Our focus here, then, is first dimension scores from the 116th House. Scores range from -1 (the most liberal) to +1 (the most conservative). A score of 0, then, would represent a more moderate voter.

The CivilServiceUSA makes available a collection of characteristics about house members, including age, gender, and race/ethnicity. I have cached these data in a package dubbed uspoliticalextras, available here.

Some demographic characteristics for US congressional districts are also included uspoliticalextras. These were accessed via tidycensus, and included in the package out of convenience. 2018 1-year ACS estimates for 12 variables. These include:

We then join the three data sets, and are good to go. This full data set is available here.

Values are similar to those presented McCarty, Poole, and Rosenthal (2016). 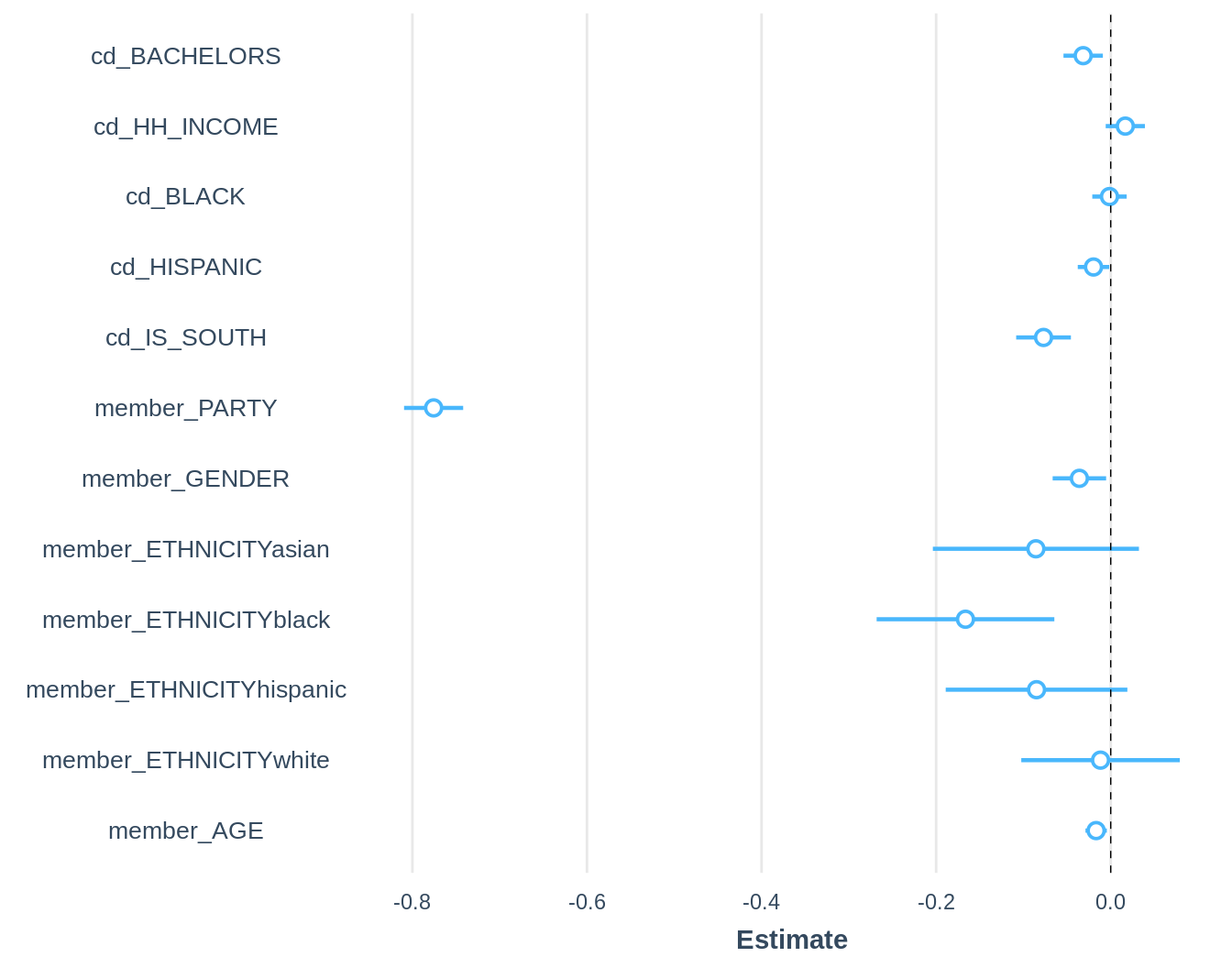 In terms of member characteristics, Black house members, female house members, and older house members all have lower scores as well. Party affiliation is the strongest predictor – simply getting elected as a Democrat amounts to a 0.776 decrease in NOMINATE scores (on average) relative to a Republican (again, on a scale from -1 to +1).

For the average present day American, model results are in no way surprising. However, as McCarty, Poole, and Rosenthal (2016) demonstrate (see Chapter 2 appendix), constituency demographics & member party have become increasingly more predictive of roll call voting behavior since the early 70s – as voting behavior in the house has become more extreme & ideologically divided.

So, this post has focused largely on aggregating pieces of a model puzzle as presented in McCarty, Poole, and Rosenthal (2016). We have assumed quite a bit of knowledge wrt the NOMINATE research paradigm, without contextualizing or motivating model composition or results in any real way. Read the reference for this – it tells the story of increasing polarization in American politics over the last 40 years or so – one that becomes more relevant by the day.